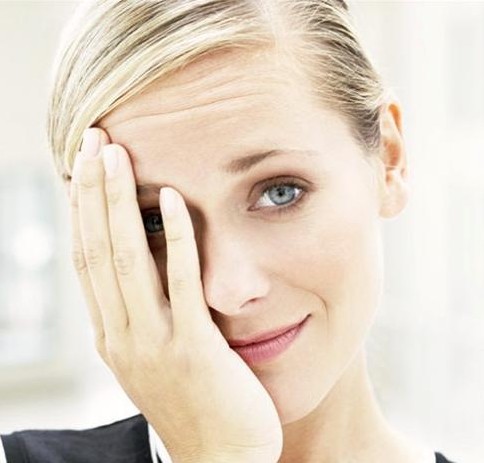 I was riding my bike to a dentist appointment yesterday. I was taking my time. It was a nice, leisurely ride. Meditative. Enjoyable. That is, it was, until a woman rode up beside me and said, “Excuse me…I’m sorry to bother you but…I just wanted to let you know your pants are completely see-through.“

First thoughts? They can’t be! What a bitch!  followed by Megan, You’re SUCH an idiot. How embarrassing. That poor girl riding behind me. That poor world riding/driving behind me! Maybe if my butt wasn’t so huge, my pants wouldn’t be see-through. How many times have I cycled in these pants? Do people know me as the see-through pants girl? Maybe they’ve done a story on me in the Metro. “They call her The Nude Rider. Unbeknownst to her, she wears no pants. She cycles…once at dawn, once at dusk, ignorantly, her undergarments proudly modelling for the world. Some say if you see her it’s good luck. Others say it’s a curse…”

My immediate feelings? Humiliation. Embarrassment. Mortification. Anger.
What was I to do? I couldn’t go home and change… I was 5km into a 10km trip, and I’d be late if I doubled-back. Plus, I’d still have to ride back, meaning I’d just be giving a show in the opposite direction. And I oddly really like going to the dentist and didn’t want to miss the appointment. (Sidebar somewhat relevant dental story: I once biked into a parked car and knocked my two front teeth out. I knocked them out again 10 years later playing dodgeball. Dodged the ball, but not the concrete floor. Conclusion: I’ve embarrassed myself a lot and am now on my 5th pair of front teeth). Right. Back to yesterday when I realized with horror that I’ve been riding Brazilian beach-style since I’ve owned these pants:

Now, at this point of recognizing my feelings of humiliation, embarrassment, shame, mortification, etc., I had a couple choices. I could react to myself by continuing to criticize and catastrophize, or I could give myself some compassion (e.g. I never see myself from that angle, it’s probably given some people a good laugh, and at least I’m wearing a backpack and can adjust the straps so it sits really low and covers things up. Looks like these tights will be reserved for at-home yoga.). Given that I live this shiznat and my entire identity doesn’t rest in dressing appropriately, it was easier for me to access my compassionate voice (We have a harder time letting this stuff roll off our back when we feel we’ve failed in an area strongly tied to our identity). I also embarrass myself quite frequently, so I get a lot of practice. However, it’s not always that easy.

So seriously, Embarrassment. Why you gots to be so distressing? I get tons of clients coming in wanting to improve their confidence and stop feeling embarrassed. Now, sometimes that embarrassment is chronic/unwarranted/maladaptive, and in that case we work to help shift this pattern.  Other times, it makes sense to feel embarrassed as we’ve done something we believe falls short of our/others’ expectations, and this occurs in front of someone else/multiple people. Essentially, embarrassment is evolutionary in that it’s telling us we’ve done something that doesn’t align with societal/group/tribe expectations. Ultimately, though, our embarrassment arises from our own judgments of ourselves (generally internalized from observations of peers/parents/media/society). My initial reaction of defensiveness and attacking the messenger (“They can’t be!/What a bitch,”) was in response to my feelings of anger; those feelings of anger simply masked my feelings of humiliation (“I’m the laughing stock of Vancouver,”) and shame (“My giant ass has made it so even fleece-lined tights go see-through when stretched across it.”), because anger is easier for me to feel than other more painful, more insidious emotions. When I was able to recognize this, I realized it was actually quite heroic of the girl to ride up beside me and let me know. I wondered if I might have had the courage to do the same, or if I’d just think “sucks to be her” to myself and continue on my way…

Anyhow, here are my tips for how to manage an embarrassing/shame-inducing experience to hopefully prevent defensiveness and/or devastation:

1) Notice what you’re feeling underneath the anger and defensiveness:

2) Respond to yourself as you would a friend:

Would you tell your friend they’re a stupid idiot for stuttering over their words? For sending an overkill drunk-text? For showing all of 10th Avenue their derriere? Probably not. You’d probably tell them it’s not that big of a deal, no one noticed, they’re their own worst critic, etc. Give yourself some support and convincing in a similar manner.

In my case, it was a good story…and a good lesson in being mindful about pant choice when riding my bike or attending a yoga class. But every uncomfortable emotional experience can be taken as an exercise in tolerance, an opportunity for learning, and (possibly) entertainment for others. Also, instead of labelling it a “good” or “bad” experience, just label it an “experience.” Just another moment in the life of ______.

5) Remind yourself it’s probably a way bigger deal to you than to them:

Whoever gave you the feedback/witnessed your embarrassing moment is probably not going home and thinking about it all night. If it’s your instructor, supervisor, or boss, chances are they’ve barely given it another thought, while your day/week has been ruined. Think about a time you’ve witnessed someone else in your shoes. How long did that experience stay with you?

“Wow! I’m so embarrassed right now!/Don’t I feel like an idiot?/Well that’ll be a good story for your friends!” Don’t be afraid to put words to your experience, depending on the context. It can be a good opportunity for communication and support.

7) Remind yourself you’re an imperfect human being and you’re expected to do this shit:

YouTube wouldn’t exist if people didn’t do embarrassing things/screw up/make fools of themselves. True, we don’t always get that message from books or movies that suggest interviews, conversations, presentations, sex, and putting one foot in front of the other always goes well, but in reality, that’s not the case. Ask anyone if they’ve ever been embarrassed before. If you come across someone who says, “No,” they’re either lying or they’re a Narcissist. Remind yourself being embarrassed is simply a result of our innate desire to belong, and having an experience where we believe we fall short of social expectations. It means you care, you’re human, and you probably have some social awareness.

And, if all else fails, just think of me and that time (or…year) I rode all over Vancouver with see-through pants.

5 thoughts on “And They Weren’t Even Lululemons: How to Take Negative Feedback and Feel Embarrassed Without Getting Defensive or Devastated”