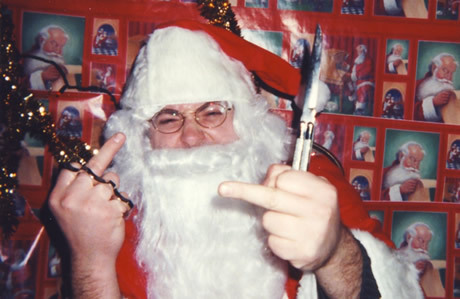 My first boyfriend loved Christmas. I mean LOVED. Not just a string of lights on the door and some Christmas music kind of love. I’m talking lights and garland all over the dorm room, playing Christmas music until the RAs had to apologetically ask him to turn it down (“Man, I love Alan Jackson Christmas too, but…”), subsisting on a steady diet of shortbread and rum and eggnog (does anyone actually enjoy rum and eggnog? I mean I love eggnog, but it’s not where I want to put my rum), and watching “The Grinch Who Stole Christmas” daily.

This was my first exposure to a true Christmas-Lover (You probably know one or two). I remember being amused and finding it kind of cute (a little weird, but cute-weird), but also feeling guilty and anxious for not having the same kind of feelings around Christmas. To me, Christmas was a mix of positive and negative emotions…fragmented happy memories of my brother and I playing with Silly Putty, Koosh Balls and Slinkies for hours with Mariah Carey Christmas on repeat until everyone got really sick of it and started listening to tracks on the album other than two and four. But my recall was also infused with memories of family conflict, a fear of Christmas baking, and concern for how Mom was doing the years we went to Dad’s. I tried to “get into the Christmas spirit” for fear of my stock depleting to my Christmas-loving bf, but no matter how much I faked it, I still identified with the Grinch.

A couple years later, that bf and I broke up (unrelated to our Christmas differences), and the next few years continued to be filled with conflict, anxiety, and dread around the season. Tumultuous relationships with family members and food, perfectionism taking over gift giving and receiving (BUT WILL THEY LIKE IT?!), and making scenes on buses and in cars while traveling snowy roads in the years after my accident–One year, I remember another boyfriend and I attending 5 Christmases and a funeral over a few days whilst driving throughout the entire interior of BC in his ’91 Accord with the defrost broken. I consumed a bottle of Carolan’s on one of the sketchier drives that was meant to be a gift (Bailey’s was not in the student budget). That was not an enjoyable time. And I wasn’t even dealing with pressures to make things “magical” for kids, or putting a Martha Stewart-esque meal on the table that many people are!

Fast-forward a few years and breakups later, and Christmas and I get along pretty amicably. Family challenges have miraculously sorted themselves out, I no longer feel conflicted about the few wine-and-Almond-Roca-related pounds I’ll inevitably put on over the season, and I’ve learned to stop trying to be a hero, and now set boundaries around how much travelling I’m willing to do to see family. Last year was actually the first year I remember truly enjoying the season, no faking it required.

But I still don’t  love  Christmas in the way my Christmas-loving BF did (I’m more of a summer gal). And I’m here to remind you that you don’t have to love Christmas, either. That’s right. You don’t have to hate Nickelback, and you don’t have to love Christmas. You don’t even have to like it! It doesn’t mean you’re a “Grinch,” it doesn’t mean you’re heartless, and it doesn’t mean you’re a weirdo with no (Christmas) spirit. there’s a Facebook Page with 17k+ likes dedicated to hating Christmas (and most of you probably aren’t even that radical in our feelings. More apathetic). You’re not alone. Now, I’m not encouraging you to dwell on the challenges of the season, or bah-humbug your way through December; rather, I’m suggesting you give yourself permission to lack the excitement some people have around the season.

Christmas can be a super stressful/emotional time for many people, and that’s affirmed to me every day by the clients I speak to struggling with difficult feelings around the holidays. For many people, sharing close quarters with family members they might not gel with (but pretending all is OK because WHO argues at Christmastime?), painful memories and grief over absent family members, white-knuckle drives or packed airports, spending money you don’t have and buying a bunch of material items while trying not to endorse materialism, being grateful enough without having it seem inauthentic, feeling inadequate as every magazine and Fbook post shows laughing families around perfectly orchestrated Xmas dinner (the cook was obviously sober), and eating and drinking and eating and drinking for weeks, then being expected to wear something tight for NYE, all the while pressuring yourself to “rejuvenate” and “relax” so you’re good to go for January. Eff that noise! Stressful!

You might not be able to make Christmastime stress-free, but you can allow yourself not to not love it, thereby reducing some of the guilt/anxiety/shame/pressure you might be feeling. While you’re at it, lower your expectations for yourself (your gift to your brother-in-law does not have to be life-changing), trust that almost everyone “indulges” during the season (it’s like travelling, right?), say No to that 13th Christmas party you’ve resentfully committed to, and buy a couple boxes of Stove-Top—-add craisins, carrots, and celery, and you’ll be sure to impress. Or add nothing. Or leave the Stove-Top in the cupboard, say screw it, and go out for dinner (that’s what my mom and I are doing). To sum, if you love Christmas, awesome. If you don’t, awesome.

Kidding. You can be totally unhappy about the holidays and you are still a worthy person.