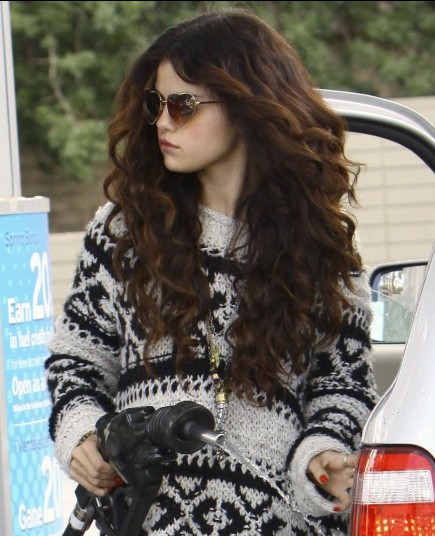 On my way to work the other morning, I stopped to get gas (I had moved into the ominous “—-” range territory on the dashboard, and I didn’t feel like playing chicken with the tank). Now, having enough time to stop for gas on my way to work is a feat in itself, but that’s not the reason I’m telling you about it; I share because I must have been so distracted by my miraculous time-management, I somehow got the nozzle stuck in the fuel vent valve (had to look that term up). I’m really not sure how this happened. I may not know auto part terminology, but it’s not like it’s my first self-serve rodeo.

Anyhow, rather than trying to diagnose the problem, I started reefing on the fuel dispenser in a panic (had to look that term up, too), and next thing I know I’ve pumped gas all over myself (ahhhh you say, now I understand the Selena Gomez photo).

It was too late to go back home to change–my alarm hadn’t gone off the morning before (it truly was the damn volume), and I’d stayed home sick the day before that, and all I could think at that point was how unimpressed my boss would be if I were to show up late again (I realized he also might not be impressed by my new scent, but a little hand-soap-paper-towel action made it bearable). I mean obviously if I’d fallen into a Porta-Potty, I might have made a different game-time decision, but in this case I convinced myself maybe this would just remind people of boating and quadding and other fun summer activities.

As I continued driving to work, feeling less and less confident in my decision, I thought,

If only I had a change of clothes at work…

There it is, folks. This time, a phrase to eliminate from your vocabulary. I’ll explain why:

Observe what feelings come up for you as you read the following statements:

If only I’d put less garlic in the dressing, we would’ve had another date.

If only I’d aimed a little more to the right, I would have scored.

If only we’d booked the wedding for Saturday, it wouldn’t have rained.

If only I’d thought of that example in the job interview, I would’ve gotten the position.

If only I’d invested in Apple back in 2004, life would be perfect.

I’m gonna guess you felt something like disappointment, frustration, grief, shame, anger, frustration, guilt, etc. (sidebar: I once really did convince myself I would’ve had another date with this guy I was super into if I hadn’t made the dressing so damn garlicky).

Now, sometimes there’s utility in those difficult feelings. Other times, we’re just making ourselves feel crappy for no reason. Read on: “If Only” is rarely benign:

This is the beneficial kind of “If-Only.” As I’ve said before, regretting can be helpful, so long as you can learn from it moving forward and/or help others not make the same “mistake.”

(Note that my “If only I had a change of clothes at work” can fall under this category.)

This is the destructive kind of “If-Only.” We can’t learn from it or make change for the future.

“If ONLY I’d chosen this program first, and not wasted 5 years of my life on that Anthropology/Psychology/Art History degree…”
“If ONLY I’d known she was cheating on me that whole time…”
“If ONLY I’d been born with a wealthy family/fast metabolism/Spanish-speaking Nanny…”

But the reality is your current reality, and beating up on yourself for existing in it is not serving you (at least in the case of the Shitty Shame Spiral).

To summarize the takeaways from today: 1) The next time you catch yourself saying “If only,” whether it be out loud or to yourself, ask yourself if it’s forward-focused and functional, or if it’s just torturing you with unnecessary difficult feelings (refer back to this post for more on how to let go of regret). You might not shack up with Shame and Disappointment as often. 2) Keep a change of clothes at work.

4 thoughts on “Eliminate This Phrase From Your Vocab For a Better Life: “If Only””