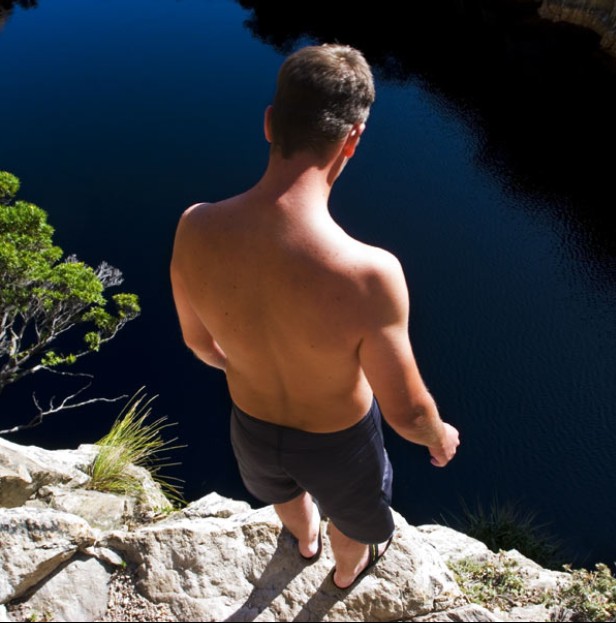 *This article was also featured on the Huffington Post.

Our minds like to tell us not to take risks (and sometimes our fathers, but usually our minds get the final say).

I resigned from my job the other day. Objectively, this was neither a smart nor a rational decision. Said job was double the salary of the one I had previous to it. I have nothing else lined up, I currently pay more than $2k a month in rent, and I’ll no longer have health insurance in a month or so. Plus, because I’m Canadian, I can’t just strut into any ol’ NYC establishment and drop of a resume. And I’m still morally conflicted about Tindering for meals, so that’s not an option either. Shit. Maybe quitting was a bad idea.

It’s true, I’m fucking nervous. There’s no script, here. Is this where I end up turning my bathroom into a meth lab? Put that pole dancing class to use? Start an underground poker club in my apartment? Somebody film this at least!!!

Still, regardless of whether or not HBO picks up the series, I know I’ve made the right decision in quitting. I came to NYC with the goal of helping people become a little gentler with themselves and others, and I was limited with how much I could do that in the position I’m leaving. Plus, I think Hugh Laurie is totally right about “waiting.”

I used to watch my brother play video games, because playing them myself caused crippling anxiety. I only tried out for teams I was sure I could make. I turned down the tennis scholarships I was offered because I couldn’t cope with losing. I was absolutely perplexed by my friends who chose to travel or study abroad–the idea terrified me. I avoided the beach because my mind told me I was too fat to wear a bikini. I didn’t ask guys out because I couldn’t handle rejection.

I missed so much life, because I couldn’t look myself in the eyes if I failed.

Perfectionism convinces us that if we “fail,” it means we’re a failure in life. That we’re unworthy, shameful and unlovable, and should be punished for our err. It seduces us into thinking that the best way to ensure a good life is to create a fail-proof environment–where we’re never uncomfortable, uncertain, or out of control. So we let anxiety trap us in our box of “comfort,” and we miss out on the good stuff.

I know this isn’t the first article you’ve read on embracing failure. It’s a trending topic. Yet I find the authors often leave out how one is supposed to embrace failure–especially when he or she has developed a paralyzing aversion to it. So how do we permit ourselves to be vulnerable, and open up to the uncertainty risk evokes?

You see, when we can relate to our mistakes and disappointments with understanding, love, and space for new learnings, we can stomach the idea of failing. Alternatively, when we relate to our mistakes and disappointments with criticism and shame, we continue to only perform in areas we know we’ll succeed. We overstudy and overplan and don’t ask our crush out and don’t make a change until we’re absolutely, positively, 225% certain we know what to expect. And thus, “risks” are not actually risks, because there’s very little that’s unknown.

Kristin Neff, who’s at the forefront of self-compassion research, says:

“Self-compassion has a strong negative association with fear of failure, whereas self-criticism exacerbates this fear. Who wants to take risks in life when you know failure will be met with harsh self-judgment? It’s much easier not to try. When you have self-compassion, however, you’ll trust that any failures will be met with kindness and support. You’ll remember that failure is part of life. This means you’ll be able to learn from your mistakes and grow from them.

In fact, research indicates that self-compassionate people are more likely to take personal responsibility for past mistakes than self-critics, but are also less emotionally upset by them. Other studies show that when people have self-compassion after failing at a task, they’re more likely to pick themselves up again and work towards new goals.”

The reality is that I might not fulfill my dreams of helping the masses like themselves more from NYC. There’s a good chance I’ll run out of money, yearn for stability, or have my application for a Green Card denied (joking about illegal activity probably doesn’t help my case). But had it not been for self-compassion, I’d be living inauthentically or would feel trapped in my current situation by my mind.

Knowing that “failure”–should that be the outcome–will be met with self-compassion rather than shame, is what’s permitted me to follow my dreams (uh, which hopefully don’t spiral into drug slangin’. Slinging?).